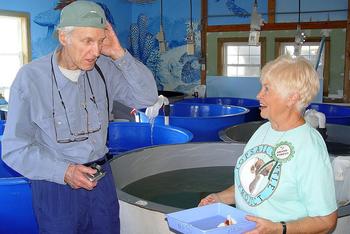 Nicholas Mrosovsky died in Toronto at Kensington Gardens Long Term Care on February 22, of complications from Parkinson’s disease. Born in Rumania on March 3, 1934, of British parents, Nicholas was educated in England, at Winchester College and Magdalen College, Cambridge and earned a PhD in Psychology from University College London. He joined the Zoology Department at the University of Toronto in 1967 and remained at U of T for the rest of his career as a member of the Departments of Zoology, Psychology, and Physiology. A member of the Royal Society of Canada, he is recognized internationally for important contributions to two fields of research: biological rhythms and sea turtle biology and behavior. Field work on sea turtle nesting beaches was one of the greatest pleasures of his many-faceted research career. His work on the role of temperature in determining turtles’ sex and the role of light in hatchling turtles’ sea- finding now influences conservation efforts world wide. Nicholas mentored many younger scientists, who viewed him with affection and respect for his insistence on the greatest scientific rigor and his attention to the craft of scientific writing. He was an avid squash player, a talented painter, a lover of opera and a good joke, and a loving father. In addition to his academic offspring and colleagues all over the world, he leaves his wife of 47 years, Sara Shettleworth Mrosovsky, his son Sebastian, his daughter Lara, and his siblings Ivan, Liza, and Joanna and their children and grandchildren. Thanks to everyone who has supported him and the family for the past three years: the staff of West Park and Kensington Gardens, the caregivers from Home Instead, and the team from Seniors Housecalls who were there just when needed.

There will be a Celebration of Nicholas’s Life on Tuesday, March 3, at 1.00 P.M. in the chapel at St James’ Cemetery and Crematorium, 635 Parliament Street, continuing in the Common Room of Massey College, 4 Devonshire Place, beginning at 3 P.M. In lieu of flowers, donations may be sent to the Canadian Sea Turtle Network or the Alzheimer’s Society of Canada.