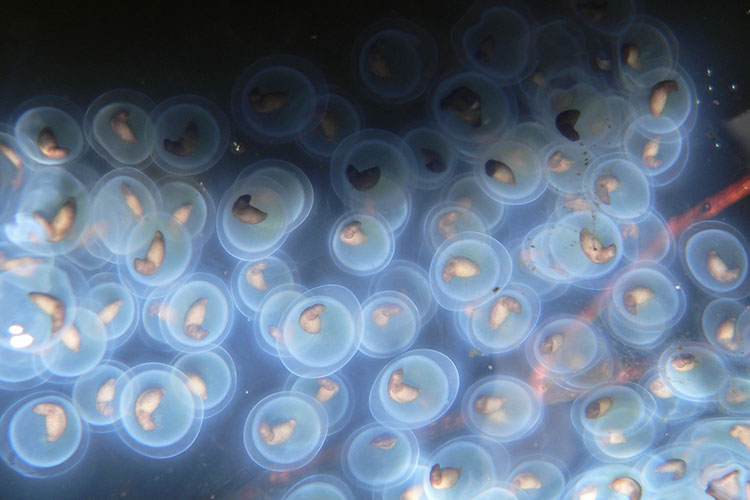 A gray treefrog in mid-vocalization. Spotted salamander eggs. One of the many, many spotted salamanders observed by the students in Algonquin Park. Photos: Patrick Moldowan.

While thousands of visitors to Algonquin Provincial Park were canoeing and camping this summer, a small band of third-year U of T ecology students was hard at work in the park collecting data and conducting experiments with reptiles and amphibians.

The group was there as part of the Research Excursions Program (REP) offered by the Faculty of Arts & Science. The program provides an opportunity for third-year students to contribute to faculty research and scholarly work in an off-campus setting.

For the students in the park, it was a chance to get their hands dirty and their feet wet and gain valuable field research experience.

Njal Rollinson, a professor in the Department of Ecology & Evolutionary Biology has been conducting research at the Wildlife Research Station in Algonquin for years and has supervised REP students for many summers.

“The Algonquin REP experience is nothing like sitting in a classroom,” says Rollinson. “The students get an appreciation for real ecological fieldwork, experimental design and data analysis.”

The group of four students lived and worked at the research station, collecting data for Rollinson’s long-term studies on turtles and salamanders including their size, behaviour, reproduction and habitat use.

“It takes a lot of hands on deck to collect our data,” says Rollinson. “Every year we handle 15,000 amphibians, 500 turtles and about 2,000 turtle eggs. The students are waist-deep in salamanders and turtles!”

For the group, a day at the office meant collecting, measuring, weighing and photographing various amphibians and reptiles; counting salamander egg clusters; digging up turtle eggs, weighing them, then returning them safely to the nest. All this while coping with the summer heat, long hours and mosquitoes.

The students also conducted their own research projects. 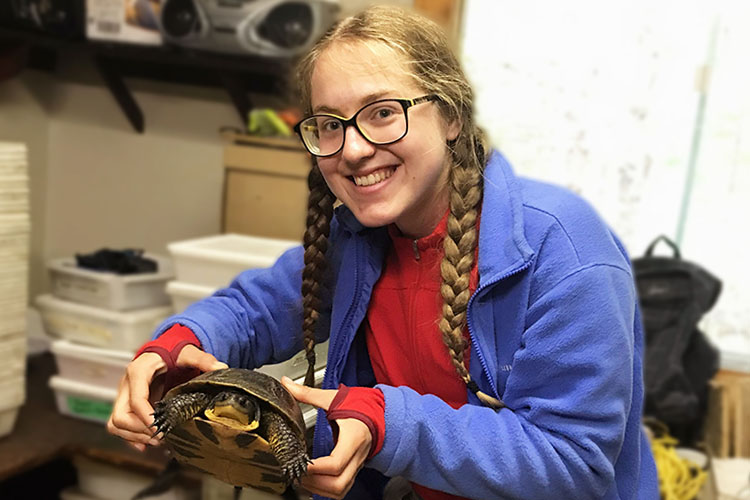 “I was trying to determine if female turtles preferred nesting in disturbed, loose soil,” says Vlcek, “and whether they find these sites with the help of the smell of organic material coming from the soil. I was interested in this question because nest-site selection has a significant impact on offspring survival.

“What I found was that turtles did indeed prefer nesting in disturbed soil,” she explains, “but that the organic content did not significantly attract them to the site.”

Gloria Gao is a University College student in the ecology and evolutionary biology specialist program. 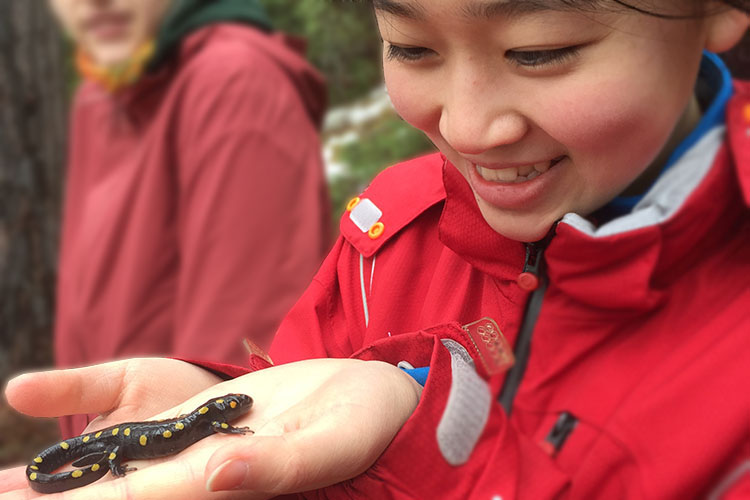 Gloria Gao getting up close and personal with a spotted salamander. Image courtesy of Gloria Gao.

“I was investigating the proportion of malformations like extra digits or missing limbs of spotted salamanders in natural ecosystems compared to unnatural ecosystems,” she explains. “Although Algonquin’s Bat Lake has a higher pH than most bodies of water, the proportion of malformed salamanders was similar to what we see in other natural amphibian populations.”

Both Vlcek and Gao have written papers based on their work and are currently preparing them for submission to peer-reviewed journals — as previous REP students have done successfully in the past.